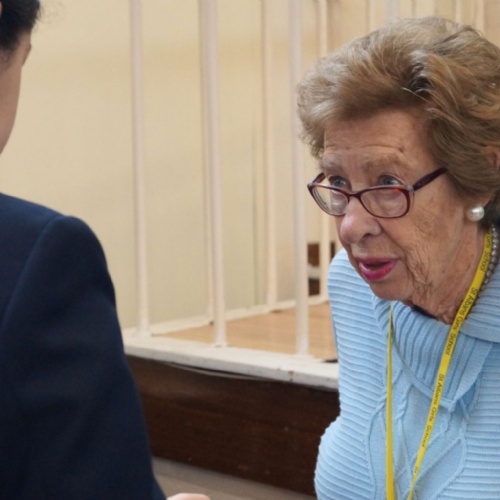 On Thursday 4th January, the Year 9s and Year 12s were honoured enough to listen to a talk from a Holocaust survivor. With the Holocaust being over 70 years ago, the opportunity today to experience something like this is very rare and even more inspiring and touching.

Eva Schloss was an elegant woman who spoke clearly with a hint of an Austrian accent. She spoke about her childhood in Austria as a Jew and then moving to Holland after the Anschluss between Germany and Austria. She was only a bit older than we were when she experienced the horrific persecution of the Jews when the Nazis invaded Holland. There were gasps in the hall when Eva talked about her friend at school, who was delightful and chatty, and her name was Anne Frank.

Anne Frank is known to all of us but Eva’s talk also made me think about the millions of others who suffered as Anne did, as well as Eva’s brother and father.

After the war, Eva’s mother married Otto Frank and they began to publicise Anne’s diary for the world to read, however it was not till the 1980s when Eva felt ready for the world to hear about her experiences.

Holocaust Memorial is a reminder of the hatred and persecution which must never happen again, but is still sadly evident in our world and society today.