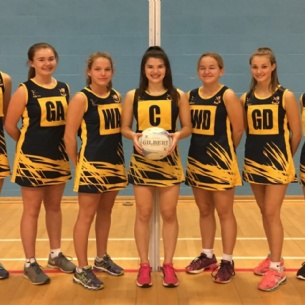 Wednesday 3rd October saw 19 excited Year 7 students travel to Loreto College to represent STAGS in the first netball match of the season. Starting with the U12A team, it was a close game throughout with both teams relatively well matched. It took some time for STAGS to find the fluency required however, resilience prevailed and STAGS fought to the end securing an 11-11 draw for the first result of the season.  A solid performance from all with some clear ideas for training to set the team up for a win next time round. Ruby Hudson was awarded Opponent’s Player of the Match for her movement and shooting whilst Iris Foley was awarded Coach’s Player of the Match for her excellent impact and determination.

The U12B team faced a tall opposition, but not intimidated by this, our girls took to the court with              determination. Fluency was an issue again due to being a new team and this greatly affected the second and third quarters with no goals being scored. Moving into the last quarter, the team were determine to finish on a high by placing the ball in front of the running player and dodging towards the player with possession. The team doubled their score in this quarter from four to eight. The final score was 18-8 with a loss for the team, but many lessons to be learnt and ideas taken into training as we move forwards. Mae Butterworth was awarded Opponent’s Player of the Match for her numerous interceptions and successful feeds into the shooting circle whilst Alice Wilson was awarded Coach’s Player of the Match for her excellent shooting and teamwork.

This year, we have had 73 students attend Netball Club and compete for selection to compete against other schools in the District League and Cup matches. Congratulations to those who have been selected so far and well done to those who keep attending club to improve, enjoy their netball and fight for the potential to represent the School. It was fantastic to get all 19 players on the court and we look forward to progressing through training and future matches!

On the 8th of October, the Year 11 netball team participated in a district tournament against 7 other teams. The girls worked well together and were determined throughout to achieve the best result they could. Our best game came to a win of 13-2 where the team played fantastic netball across the whole court, in which we showed new skills that we had learnt in training. The final results of the games were 3 wins, 3 losses and 1 draw. The player of the tournament was awarded to Catherine Buck due to her excellent interceptions and accurate passing, as well as encouraging the rest of the team when the result wasn’t going our way. Well done to all the girls who played and hopefully we will have a good rest of the season.

The 9th October saw the Year 11 team compete against Marlborough Academy in a league match at STAGS. From the start to the end it was clear that the straight 7 players were on a mission to succeed. Numerous interceptions and well-timed movement resulted in a 6-0 lead to STAGS after the first quarter and effective circle play saw the lead grow to 12-2 at the end of the first half.

Going into the 3rd quarter, the team decided to make some changes to utilise the opportunity to gain competitive footage for their GCSE PE. Taking time to adapt to new formations with six out of the seven players changing positions, the team focused on applying the core skills along with the team tactics and held the lead 14-6 going into the final quarter. Team spirit was high and the reflective skills of students who have been playing netball together for 5 years now, was truly a pleasure to witness. Some superb passages of play from the whole team saw STAGS take a 19-6 win for their league results. Every player performed well  considering the fatigue the will have felt after the tournament from the day before, however, Catherine Buck was  outstanding again and was awarded Player of the Match.