With the commemorations for the end of World War I fast approaching, I thought it was time to reflect on the ways that STAGS has been involved in the events marking the centenary of World War I.

In February 2015, I accompanied two Year 9 students, Niamh Haynes and Jasmine Shenton, on a four-day visit to the Battlefields of World War I as part of the government Centenary Battlefields Project. We worked with other    teachers and students from the local area while visiting sites connected to the various phases of the war.  Niamh was  selected to represent our group at the wreath laying        ceremony performed at the Menin Gate every evening at 8pm. She had the honour of laying the wreath alongside the British Ambassador to Belgium, Alison Rose.  On our return, Niamh and Jasmine created a static display about our experiences that was housed in the Museum of St Albans for a month and was visited by 1488 people.

I had found that the programme was such a fantastic opportunity for students to engage with World War I education that I applied to become a Specialist Leader in Education (SLE) to work with the coordinating team based at University College London Institute of Education and was duly appointed to the role.  Since then I have managed to develop our ties with the national commemorations and the international events too.

On 30th June 2016, five students - Niamh Haynes, Jasmine Shenton, Ellie Slaughter, Jemima Biodun Bello and Lorna Mistry - accompanied me to Westminster Abbey where we were among the select 600 people who, alongside HM The Queen and HRH Prince Philip, the then Prime Minister David      Cameron and other political figures, marked the 100 years since the start of the Battle of the Somme.  We were specifically acknowledging the work of the nurses at the Front and Lorna and I delivered readings about Nurse Edie Appleton’s service while the other four students mounted a 15 minute watch alongside service personnel in an all night vigil at the Tomb of the Unknown Soldier.  We had the privilege of meeting Edie Appleton’s great nephew who showed us the original of her diary and presented the school with a copy for our Library.

My work for the programme continued that September when I accompanied a tour where newly qualified history teachers were supported to see how effective a visit to the historic sites of the war could be.  This had been a particular passion of mine when applying for the role of SLE and it was

fantastic to see how the teachers and their students responded to such a key experience. Many of those teachers have since gone on to run their own, highly successful visits.

February 2018 saw another opportunity for STAGS students to take an active part in the commemorations.  Anna Lofts, Rosa Bowbrick, Kathryn Mee and Niamh Haynes accompanied me to Belgium where we supported the installation of the Belgium Government’s ‘Coming World Remember Me’ artwork. This involved the placement of 12,000 of the 600,000 clay figures (three of which Niamh, Jasmine and I had created during our 2015 visit) in a section of No Man’s Land just outside Ypres. The weather was cold, but the experience really warmed us as the figures represented the 600,000 people who had died on Belgium soil during the war and so we felt we were acknowledging the sacrifices of both soldiers and civilians who had been touched by war.

In August 2018 I was involved in the Amiens 100 event in France marking the beginning of the ‘Last 100 Days’ of the war. This international event saw HRH Prince William, Theresa May and Ministers from Australia, Canada, France, the United States and the Republic of Ireland come together to highlight the coordinated efforts of the Allies during the final months of the war. My role this time was to support the Government’s International Student Tour and help launch a static display that would be housed at the Sir John Monash Centre where students on the visit from across the world had carried out   research and had explained the role of their country in the Battle of Amiens.

11th November this year is clearly a significant event in the centenary commemorations and I was delighted that I was personally invited to attend the National Armistice Commemorations in Westminster Abbey again in the presence of HM The Queen. I was allowed to extend this invitation to two students - Lauren King and Teodora Zvonar - and am delighted to share with you that Lauren has been selected by the Department of Digital, Culture, Media and Sport to take an active part in the ceremony which will be screened live on BBC1 starting at 6.00pm this Sunday. 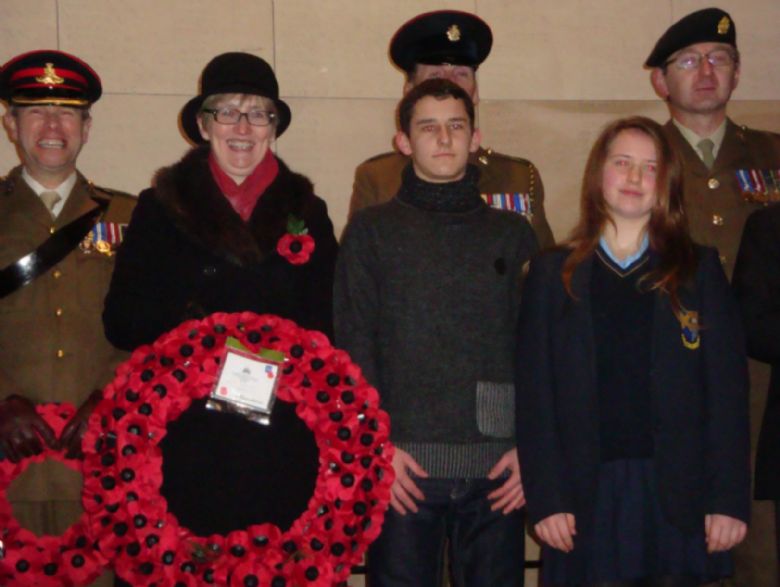 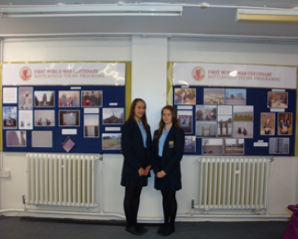 The programme has developed from a small part of my work to being a really exciting opportunity.  The events and experiences I have been able to share with students have allowed us all to work with peers from the local area and further afield.

Commemorating the war matters. We no longer have a direct link to those who fought as the last WWI   veteran died in 2009; therefore we MUST ensure that our young people reflect on conflict and how it can be a learning experience for the future to avoid the mistakes of the past.  I hope that you will take time on Sunday to mark the Armistice and will discuss this and its significance.

Please enter some content for your news story here.