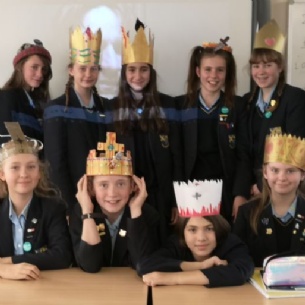 Year 8C has been studying Macbeth. Vanessa Tandy explains what they have been up to: “Recently I have been reading Macbeth in class. Towards the end of the topic we were given a project to make a crown for Macbeth. We were given the option to either design a crown which Macbeth might actually wear or a  metaphorical one. I did it metaphorically. My crown was massive to show that he can't fill the shoes of the last king.  It was also covered in blood to symbolise when Macbeth had the king’s blood on his hands. On my crown was a Lego character to represent Lady Macbeth, dead and covered in blood, to show the way she died by jumping off a tower. Finally I chose to have some gems missing to show that even though he is king his life isn't perfect.” This task provided challenge and drew on their creative skills. The students produced some amazing work that showed real insight into the play and the major themes and motifs.