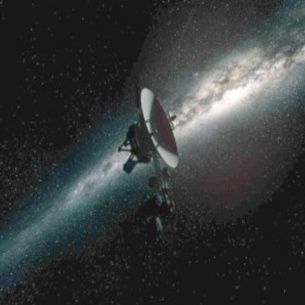 The documentary we watched this week on Voyager 1 and 2 was very informative and eye-opening.  Voyager 1 is the first spacecraft to reach interstellar space. It was originally launched along with    Voyager 2 in 1977 to explore the outer planets in our solar system. However, it has remained          operational long past expectations and continues to send information about its journeys back to Earth.

Both Voyagers now sail beyond the reach of the Sun’s influence, the heliosphere, as humanity's most distant emissaries. Voyager 1 is 21.6 billion kilometres from the Sun; Voyager 2 is 18 billion              kilometres from the Sun. Between them, Voyager 1 and 2 explored all the giant planets of our outer solar system, Jupiter, Saturn, Uranus and Neptune; 48 of their moons; and the unique system of rings and magnetic fields those planets possess.

Both Voyager spacecrafts carry a greeting to any form of life, should that be encountered. The      message is carried by a phonograph record; a 12-inch gold-plated copper disk containing sounds and images selected to portray the diversity of life and culture on Earth. The contents of the                     record contain 115 images and a variety of natural sounds, musical selections from different cultures and eras, and spoken greetings from Earth-people in fifty-five languages.

We have been enjoying attending Mr Zarrouq’s Astrophysics weekly club. To us, it is important to   extend our learning through showing interest towards the subject of physics outside our lessons. It encourages us to discuss new possibilities and our thoughts on discoveries yet to come.