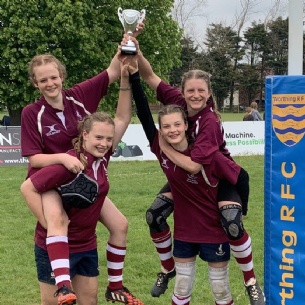 Congratulations to Alice, Lottie, Konnie and Charlie, Year 8, all members of Welwyn Garden City Rugby Club, Under 13's team, who notched up another notable victory at prestigious girls' rugby tournament.

The rugby tournament was held over several days, at Worthing Rugby Club this bank holiday weekend. The tournament brings the 16 best girls' teams in their year groups from the south of England at ages Under 11, Under 13, Under 15 and Under 18.

The four Year 8 students have demonstrated impressive skill and extraordinary team spirit by notching up successive wins at girl's rugby tournaments across the country this season. They have remained unbeaten throughout and established themselves currently as the top girl's rugby team in the South of England.