'I just didn't realise that some of the things my friends were getting involved with were so dangerous until I watched the play at school.'

What is CCE and CSE?

Child Criminal Exploitation (CCE) Children who are trafficked, exploited or coerced into committing crimes are victims in need of safeguarding and support. Though perceptions are altering these young people are still often criminalised and perceived as having 'made a choice' to take part in illegal activity.

Signs of sexual abuse and grooming

Further information can be found on the NSPCC website.

What do we do at STAGS to inform and protect children against CSE?

Chelsea’s Choice is a play about a girl called Chelsea and how she became a victim of Child Sexual Exploitation (CSE). Delivered by Alter Ego Creative Solutions the play aims to raise awareness around the following issues:

Based on a true story, the play references the boyfriend model of grooming (although it does cover other forms of grooming) and has four actors who take on all the roles. The performance lasts for 40 minutes and the post-show talk (where the actors debrief on the learnings) lasts for 30 minutes 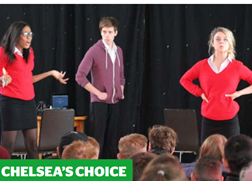